On beauty and gender aesthetics, today and in early Islamic art [14-18th century.]

When Paul asked me whether I knew an artist who specializes in drawing portraits of Islamic resistance martyrs so he could have his portrait made, I had no idea that his random question would lead me into the worlds of Islamic art and the labyrinths of sexual identities. Paul told me about a book[1] which included popular artistic images from Islamic countries. He declared his desire to be depicted along the same aesthetics depicted in this book.
What first attracted my attention as I was going through the book was the image of the Buraq. The Buraq is the steed which carried the prophet Mohammed from Mecca to Jerusalem during the Israa and Mi’raj Ascension or ‘’Night Journey’’. According to Islamic tradition on the night journey Prophet Mohammad rides his Buraq touring the circles of heaven and hell. On this tour he meets previous prophets such as Adam, Moses and Jesus before encountering “in his heart” God himself.
Popular artists from Pakistan, India, Egypt and Syria recreated this image with the human half of the Buraq as an attractive woman, decorated with jewels and long hairdos. The Buraq itself has anklets dangling from its four extremities.
The image of a white Buraq, specifically the one drawn in India in middle of the preceding century, reminded me of the Lebanese pop star Najwa Karam. A few days before I had seen a huge billboard on which the famous singer was referred to as “The Pearl of the Gulf”. In her white dress she appears in a pose, which reminds me of a horse’s stance. Her picture was taken from behind with Karam turning back towards the photographer. Her gaze is neutral and expressionless, making her resemble a drifting mystical being. But what particularly reminds one of a horse in her picture was the way she positioned her butt, which was projected upwards so that it was the focus of the picture.

After that I searched for pictures of other pop stars photographed as horses. I visited many other female Lebanese singers’ websites. Not a single one was exempt from my comparison. They had all assumed the “horse” pose at a certain point of their career. Moreover, looking at pictures of these stars, one could imagine them as creatures living on substances unavailable on our planet since their appearances keep changing, making it difficult for those following their news to actually identify that this is the same woman in all of her pictures. And this further reinforces their “divine” quality, their resemblance to mythological beings (god Krishna, whose manifestations are limitless, or the “new Buraq” who leads men to heaven).
I wondered: why Arabs chose the horse as the animal that flew and transported the prophet from Mekka to the Aqsa mosque in Jerusalem? Why not pick the eagle for example, which among “God’s creatures”, seems like the most suitable candidate for this role?
I researched the status of horses for the Arabs and found that they held it in immeasurably higher esteem than other beautiful animals. Poets’ poems about the mare, which I was surprised in such abundance, is the most salient testament to this admiration. They described the mare similarly to the way in which they used to praise and woo women or young men (Ghulam). Even the 'scientific' description of the pure Arab mare employed almost the same expressions used to describe the desired female body. For example, one online source writes, “The butt bones should be far apart and salient, and the chest should be high, wide, its muscles visible, hard, neither deep-set nor caved-in, and two muscles resembling breasts should be jutting out. Its eyes should be large, rectangular, clear and shiny, fixed and staring hard, with delicate eyelids and seeing afar…”

Return To Origins
I was able to access the lower floor of the AUB library dedicated to archives and special collections. There, I perused art books on Persian miniatures dating back to the 16th and 17th centuries. It seemed that there was a significant difference between the drawings of popular artists in the 1940s that I had seen in my friend Pauls’ book, and the Persian artists’. The difference was not limited to aesthetics. For while the popular artists portrayed the human half of the Buraq as female, the 16th century artists portrayed it as a human being of undefined gender.
In the course of my research on Islamic art I was introduced to a wonderful book entitled: “Le Grand Moghol Et Ses Peintres”[1]. The book includes magnificent illustrations of miniatures from the 16th and 17th century, many of which I ended up as a background for the portraits of the photographed persons who formed the core of the images. According to the author, Amina Okada Mughal artists were influenced by European art, which they came in contact with when Jesuit missionaries came to India. Subjects inspired by European art are encountered in many a Mughal piece, that nevertheless disregard the religious content of the European representations. The themes of Mughal painting were varied; its golden age was between the 16th and 17th centuries when it mainly portrayed glories of war, conquest, historical meetings, Imperial portraits, hunting trips; and in a later stage: animals, birds and scenes of the leisurely life at the court.

The Female Man
As I went through the books of that era, it seemed that the Mughal artists who were in fact the students of the Persian artists, adopted a drawing/painting style that feminized male features, which was fashionable at the time. Thus not only was the image of the Buraq confused, but also that of male personages such as Jahangir, Shah Jahan, and other Indian Mughal Emperors: something soft appeared there, reminiscent of the ghulam, that is the youth whose beard hadn’t yet grown. Afsaneh Najmabadi, who, in her book “Women with Mustaches and Men without Beards”[2] deals with another period in history, making it interesting to note, that beauty in old Iran (at the beginning of the Qajar dynasty (1785 to 1925)) was not an exclusively female privilege: men shared in it equally with women, not to say surpassed them, particularly the ones dubbed “the beardless” or ghulams. Najmabadi writes that men were portrayed with feminine features resembling, to a great extent, those of women. The only thing setting them apart is, for example, their headdress. Moreover, “the perception of male beauty and eroticism were considered elevated feelings”. According to Khaled Ruwaiheb in his book “Before Homosexuality in the Arab-Islamic World, 1500-1800“[3] “attraction to a youth whose beard hasn’t yet appeared was completely acceptable”, which allows us to conclude that Arabs considered “the beardless” as a kind of “other sex”. For this reason, they did not consider it “shameful” to project erotic rapport with such a youth. And the decrees judges made at that time varied in their severity. For example, kissing, touching and “rubbing thighs” were not considered homosexual acts. What was decreed “homosexual” and hence unacceptable was straightforward intercourse between two men. The following is a text quoted by Ruwaiheb from the Aleppine scholar Ali Al-Dabbagh al-Miqati (1760): “[The beardless]: In being free of a beard he is akin to the people of paradise [a reference to well-known tradition according to which the people of paradise will be beardless]… the Creator is pleased with him and so did not bring forth what would disfigure his cheeks, thus the mirror of his face is clear, as the cloudless sky….’’. Ruwaiheb also mentions that being infatuated with the beauty of a ghulam and desiring him were considered two different things. He quotes the following example by the jurisprudent and religious scholar (faqih) Abi Hamid Al-Ghazali (1058-1111): “do not think that the love of beautiful forms is only conceivable with the eye toward satisfying carnal desire, for satisfying carnal desire is a distinct pleasure that may be associated with the love of beautiful form, but the perception of beauty in itself is also pleasurable and may be loved for its own sake.”

The Third Book
My research on the Buraq was completed with a book[4], which includes illustrations of the Illumination manuscript produced by the Herat school in Khurasan. The manuscript illustrates the Prophet Muhammad’s ascension to the Heavens on the back of this mythological being, in the trip known as the isra’ wal mi‘raj (The Night Journey and Ascension). I entitled my project “Divine Comedy” because I perceived a similarity between the images present in this book and Dante’s famous epic, which he wrote between 1308 and 1321, the year of his death. Some academics claim it is probable that Dante was in turn influenced by the tale of the Night Journey and Ascension and by the Arab poet and philosopher Abi al -‘Ala’ al-Ma‘arri’s (973-1057) book The Epistle of Forgiveness, a literary text that describes the state of souls in heaven and hell.

Gender Aesthetic
My work is an attempt to explore the aesthetic employed by 16th and 17th century Mughal artists using contemporary technics. I photographed individuals who represent an amalgamated aesthetic, incarnating both the male and female sexes. I used 1940s Iranian, Indian, Pakistan and Egyptian popular portrayals of the Buraq (using only the body of the steed), and the peacock. As for the miniatures featured, they are mainly selected from Mughal Islamic art and from Persian and Turkish miniatures from the 16th to the 18th centuries. Also, I altered the original drawings according to the content of the “scene” or to what works well visually and content-wise with the character being photographed. The models Some of those I worked with described themselves as “men who liked to play women” from time to time, transvestites, cross-dressers, transsexuals, and transgender individuals. What caught my attention more than anything else was the look in the eyes of some of the models, in which I saw the seductiveness of women, maleness without masculinity and a kind of childhood purity. The look was both astonishing and disturbing. I am not entirely sure what it moved in me, but I understood why I had always found the faces of men and women usually considered “beautiful” inexpressive. Do they become common and inexpressive because they insist on showing their “man- or womanhood”? On the other hand, where does this infatuation with the ghulam, this boy/girl comes from? Is it because the two sexes amalgamate in one person in a union that completes the human image? Or does the “beardless” suggests purity, synonymous with vitality and youth (a clear face, pure skin, etc..) which arouses a “soft desire”, hence making the desire for the ghulam acceptable? I don’t know; but what I saw in these persons seemed to me something very close to what I imagine “divine beauty” could be. I chose to work with feminine men, male transvestites, transgender or transsexuals (male to female) only, since the aesthetic of the portraits I am working on requires the feminine form. 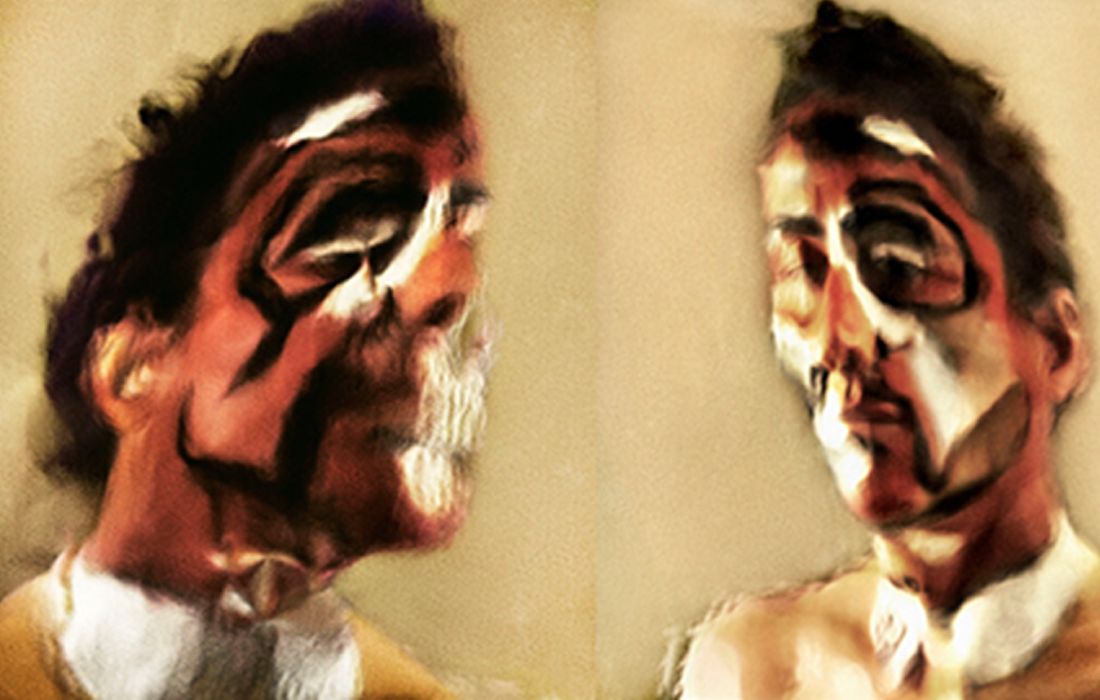 THE UNBEARABLE LIGHTNESS OF WITNESSING, STUDIES OF A SELF-PORTRAIT, 2012